As predicted, we had a fun time at our temple last night. Here’s the evidence: 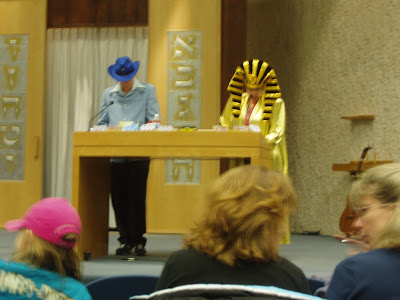 I know, I know, this photo is on the blurry side. But I wanted to show you a bit of the costume finery that showed up. When his parents got up to do a reading, a youngster (actually a former student in my second grade religious school class!) left these goodies, hoping his parents wouldn’t notice them before sitting down. They did. 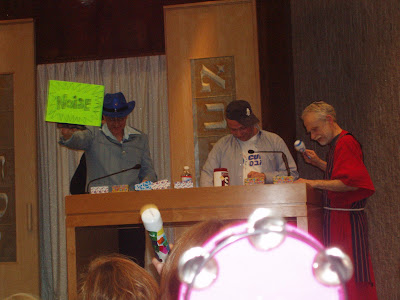 Remember the part about how we have to make noise to drown out the name of that evil guy during the story? They had a “Noise” sign that they held up for a minute and then put down so that everyone would know when to stop making a ruckus. 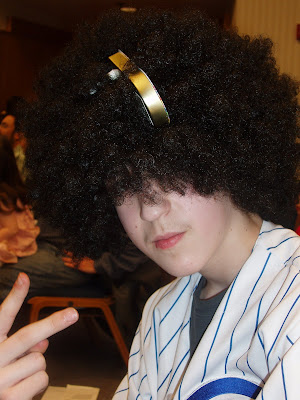 Here’s the 13-year-old growing tired of holding his noisemaker, so he stuck it in his afro wig. 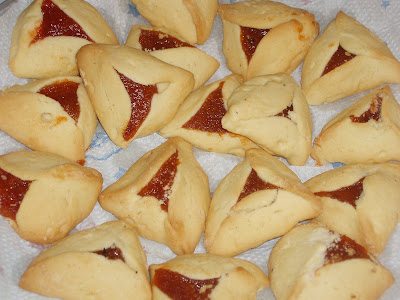 Here are those Hamentaschen cookies I wrote about yesterday. These have apricot preserves inside. 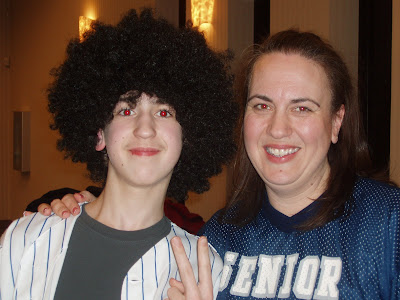 Here’s the 13-year-old in a non-identifiable-by-name costume (He wore a Cubs jersey with an afro wig. Simple, understated…) and me, wearing a football jersey from the Powder Puff Football Game at my high school, Farragut High School, Class of 1986! (If you’re a classmate and have found me through a google search, identify yourself in a comment!!!)

Finally, I wanted to give you a taste of the reading (that makes no sense but I’m sure you all really do understand what I mean!). Some of it was read in Hebrew and some in English. This video is some of the Hebrew part. Don’t worry about understanding it; you’ll know when she gets to the parts mentioning the one who must not be named!