I just caught the encore of last night’s Rock and Roll Hall of Fame Induction Ceremony on VH1 Classic. By the time I settled down in front of the tv last night when it was on LIVE, I was only able to catch Billy Joel’s long-ass introduction for John Cougar/John Cougar Mellencamp/John Mellencamp, and John’s equally long-ass speech, which were both mildly entertaining. I have always liked John Mellencamp, both his songs and his passion for the Midwest and its farmers.

But alas, while I assumed that Madonna’s induction would be last (keeping the people hooked in for the ratings), I had missed her. I set my DVR for today’s show, and now you’re caught up with my story.

As I watched the highlight-filled video about her entire musical career, I marvelled at how much she has achieved. I am one of the many who has followed her since the very beginning. I purchased a mesh shirt (though not brave–or old–enough to wear it over just a bra) and I wore bangle bracelets and sunglasses while doing my best to learn the choreography from the “Borderline” video that was on constant rotation on MTV. 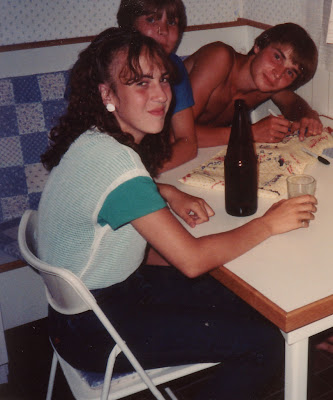 I remember having a debate with my dad about a Time or Newsweek article from around 1982 or 1983 that compared Madonna to Cyndi Lauper. It basically proclaimed that, between the two of them, the one who had no staying power was Madonna and that Cyndi Lauper was going to take over the world. (My dad agreed with the article while I begged to differ.)

I continued to purchase her music over the years and always wanted to see her perform live, but figured it would probably never happen. Then my sister surprised me with two tickets for us to attend the Confessions Tour! When Madonna came to Chi-town on this tour, it was big news that she intentionally kept the stadiums she performed in extremely warm. If I recall (there I go, trying to remember stuff again), it was partly for her voice but partly to simulate a hot and sweaty dance club. It was freakin’ hot in the United Center that night, that’s for sure! Our seats were high up but on the side of the stage so we could see really well. It was a really good show and we had a great time. We even had a few cold drinks so we could manage the heat. (hee hee) Since I work in the fitness industry and see lots of “Hot Mamas” who are well into their 40’s, 50’s, and even 60’s, Madonna’s level of fitness in her late 40’s didn’t surprise me at all, but man, she is a phenomenal entertainer! Her concert was not just a “show”; it really was an “Experience”. We were blown away by some of her big numbers, like this one:

Now, not wanting to take a darn thing away from Cyndi Lauper (because I also enjoy her music immensely and she certainly carved out a fabulous career for herself as well: WHY did the writer of that article feel the need to declare that only one of them would be successful?), Madonna has certainly affected the music world–and continues to do that–in a major way.

Justin Timberlake was the person who was chosen to give the induction speech for Madonna, and although the parts of the speech where he “jabbed” at his former girlfriend (the troubled Pop Princess) are being heavily quoted today, his entire speech was really funny and well done. I’m sure it’ll be on Youtube any minute now.

Madonna’s speech as also well done. It was sincere and heartwarming, really. It was nice to get a teeny tiny bit of emotion (though no tears!) out of this woman known for her no-nonsense methods. (I also noticed that she dropped the British accent for the speech! Yay!)

The part that puzzled me the most, and I’m hoping to get some comments about it from those of you who watched it, is why Iggy Pop performed punked-up versions of two of her hits (“Burning Up” and “Ray of Light”). I get it that’s he’s from Michigan, like Madonna. I get it that he opened for her on her 2004 Reinvention Tour. But…uh…WHY? Why didn’t she just perform her own stuff? That was so annoying to me! I have not been a big fan of Iggy Pop music over the years, with the exception of this song, which is one of my favorites (and not, methinks, in his typical style):

After I got over the fact that Madge would indeed not perform, I became intrigued by the idea of Iggy perhaps punking up and performing “Like a Virgin”, but he didn’t. That’s okay. Had he done that, there’s no way it would have been more entertaining than THIS version:

Anyone wanna add anything?

Next post: He’s Way Too Young Yet To Lose His Mind For Those Precious Seconds…It Didn’t Happen To Me Until I Was At Least Fourteen!