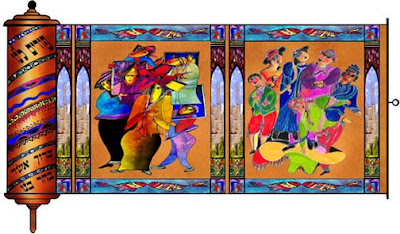 Happy Purim to all of my Jewish readers! (Do I have any?)

Tonight we head over to our temple for the reading of the Story of Esther. It is sure to be loud and fun, because it’s supposed to be!

Here’s the Cliff’s Notes version: Way back in the day in the land of Shushan, King Ahasuerus wanted his wife, Queen Vashti, to appear before his buddies wearing only her crown. She refused to do that, and he banished her from the kingdom. After that, he wanted to find a new Queen so he conducted something like a beauty pageant and chose Esther from hundreds of “applicants”. Mordecai, Esther’s uncle (or cousin: this has been under dispute…depends on who you ask to interpret the story!), told Esther not to reveal to the King that she was a Jew.

Soon after, Mordecai uncovered a plot to kill the King and reported it. The King had an advisor, a man who shall not be named. (Not this one…but THIS ONE.) The King promoted that man so that he was more powerful than the other officials. He wanted everyone to bow down to him. Mordecai refused to do that. After Mordecai’s refusal, the one who shall not be named thought that it would be a good idea to dispose of all the Jews. He rolled dice, or lots (called “Purim”) to decide the date that this would all go down.

Mordecai appealed to Esther to talk to the King and, without waiting for an invitation to see him, was brave enough to go to her husband and talk to him. She told him that she was Jewish. She asked the King what he would do if he heard that somebody was plotting to kill all of her people, and he said that he would bring that fate onto the person who was making such a dastardly plan. And that was the end of the one who shall not be named!

Today we celebrate with great merriment. Purim is a funny holiday: you’re supposed to drink and have a merry old time (though many just have the merry old time without the alcohol). We dress up in costume, like Halloween, but tonight at the temple we’ll see lots of people dressed like the characters in the story.

As the story is read, every time that man’s name is spoken, people “boo” and “hiss” and play instruments and shake noisemakers to drown out his name. It’s really, really fun. In fact, if I remember, I will take a couple minutes of video footage to post tomorrow.

Oh, by the way: one of my favorite things about Purim is that we eat Hamentaschen, triangle-shaped cookies that remind us of that guy’s three-cornered hat. They are DELISH!

So there’s Purim in a nutshell! Hope you enjoyed!