Creative Parenting 101: Presenting the Rules Before The Game Means Fewer Problems in the Second Half

I got my U.S. Cellular bill on Wednesday and was slightly surprised to see some roaming charges (only $14, but that’s like 2 gallons of gas!) on it from Jim’s last business trip. I encouraged him to use his cell to call us at home because I thought our plan had 75 minutes of roaming included each month.

I was wrong. I called to check into it and we have only 45 roaming minutes included. Okay. Whatever. At least now I know, and I will pay that $14 secure in knowing that I’m not getting ripped off with improper billing.

While I was on the phone with the Customer Service agent who was mostly nice (I wanted to make sure to put that here, just in case a U.S. Cellular executive finds me in his/her periodic blogsearch for customer comments) and helpful, I decided to ask her to analyze our current plan to make sure we’ve got the right one. We’ve got three phones on the account (mine, Jim’s, and the 15-year-old’s) and we don’t go over the allotted minutes, but I just wanted to see where we were at.

She checked our last three months of usage and we decided that I am right where I need to be. All was hunky-dory until she said, “Hmmmm.”

“You know, for $19.99 per month you can have unlimited texting for the whole family.”

She obviously doesn’t know me, because she didn’t stop there and, frankly, said the exact thing that, had I been even slightly wavering on my definitive “No”, would have completely turned me against her regardless of how good the deal was:

“Well, you know it’s what all the teenagers want.”

“But it’s UNLIMITED texting, and texting is really the way that most teenagers like to communicate.”

I retorted, “I hear you and I get it, and I even agree. But my teenager does not communicate like that very often. He talks to his friends in person or on the phone, and uses e-mail. In fact, he pays me back for the text messages that he does send out. I am not interested in giving him that kind of free reign. So thanks, but no thanks.”

Then she thanked me for being a fabulous customer, we hung up, and she–no doubt–sat back in her chair and called out, “Hey! Guys! You’re not going to BELIEVE this one…a parent that doesn’t think her teen should have unlimited texting! And her kid pays her back for his texts!!!!!!!”

But that’s okay. I’m fine with being ridiculed by complete strangers who I will never meet and who have no impact on my life whatsoever. I know that I’m doing what works for us.

In fact, when the kid turned fourteen, we decided that it was time to get him a cellphone, not just because he wanted one, but because as the kids are getting older we are often all in different parts of town at once and we needed to be able to communicate if we would be late to pick him up or if we had other miscellaneous issues that would be made easier by being able to communicate. The boy had been begging for a phone for almost two years, and we really just needed to wait until we thought Necessity outweighed Desire by just a bit.

We did decide that, since we were going to get him a phone, we would get him the Razr, which is the one he wanted. He had been dropping major hints about it and we thought it would be nice to get him the kind of phone that he really wanted all along. (You see? We’re not ALL business! LOL) 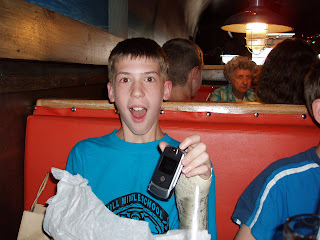 If you’ve been a reader for, oh, a minute or two, you won’t be surprised when I tell you that I typed out a list of cell phone rules that we put right there in the gift bag with the phone on his birthday. I wasn’t leaving anything to chance. This way, not only could he keep the rules in his room and refer to them if he wasn’t sure about something, but also more importantly: I would be able to refer him to the paper if he ever broke one of the rules. At that time, he was sometimes “forgetful”, as in “I don’t remember you saying that, Mom” or “You never told me to take out the trash, Dad!”

I was pleasantly surprised when he took the time to read the rules right after opening the phone, and then he looked at me, smiled, and said, “Okay!”

And now, for your reading pleasure, the Rules of the Ring, Wells-style:

1. Take great care of the cellphone. You must (with your own money) go to US Cellular with one of us and get some kind of case for the phone. It will cost about $15-20.

2. If something happens to it (it breaks, gets lost, stolen, whatever), you must tell us IMMEDIATELY. If it’s missing and someone finds it, they could use our account.

3. We have the phone insured, so if something does happen to it, there is a $50 charge to get a new phone, instead of the full price of the phone. You will pay the $50 if this occurs.

4. If you are home, you may not make calls on your cellphone. You must use the landline UNLESS there is a school/homework issue or some other immediate need to make a call while we are using the landline.

5. Although your phone has text messaging capabilities, we would prefer that you don’t text out. Incoming text messages are free, so if you receive them from Julie or any friends, don’t worry about it. If you text out, it will cost 25 cents for each message, which you will pay to us*. Text messages are itemized each month on the bill.

6. You have 8 ringtone credits left for one of the ringtone programs I downloaded to your phone. If you don’t find 8 right away, you don’t HAVE to use them all now; just wait until new ones come out.

7. I put one game on your phone. Any other games that you download (keeping in mind that you have limited memory that must cover all photos, games, and ringtones), you will have to pay for.

9. Should you not be able to pay for any charges that you put on your phone, we will confiscate your phone until you can pay for them.

10. We will pay for the monthly service on the phone. That, along with the insurance on the phone, equals $15/month. We will consider that to be an allowance increase**.

11. When school begins, we reserve the right to confiscate the phone if it becomes a distraction from your schoolwork, or if you abuse the privilege of having the phone. 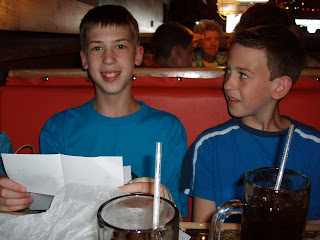 The older one, happy to follow the rules we laid out. The younger one, probably thinking “You’d BETTER not ruin this for me!!!”

I am happy to say that in the past *almost two years* that he’s had the phone (other than the two months he overtexted according to our standards), he’s done very, very well with it, only losing it once when it slipped out of his pocket in a Chicago cab as we were getting out to catch a train. He paid the insurance deductible with no argument, and got his replacement phone in the mail. Two days later, the honest cabbie called me by hitting “Mom” on speed dial: he had been hearing the “battery low” tone in his cab for two days before realizing what it was. I sent him postage money and a nice tip, and he sent us the phone!

*Text messages are 20 cents each from U.S. Cellular, and I told him he would pay us 25 cents each. I wanted to discourage him from over-texting and, in fact, I have only collected text money from him twice, in the months when he did almost $10 in texting. I have been really, really pleased that he has kept it under control!

**He had been BEGGING for an increase in allowance for several months and we had been really unwilling at that point to change our budget for that. We thought this was a great compromise!

Previous post: And There Would Be No Orange Residue On My Fingers, Either!