When You Find Out Your Hard Work Was Totally Worth It…

As some of you might remember, the fifteen-year-old just “found” Lacrosse early last year and really, really wants to play for his school. Click here for a little background. We have put him into a few workshops and such, including, most recently, Core Conditioning sessions on Mondays after school for 8 weeks and Friday evening sessions run by a couple of the coaches from his high school.

We were happy to discover that he could play on the Freshman/Sophomore team (he’s in 10th grade) no matter what (without the tryouts), but was welcome to try out for Junior Varsity and Varsity. Since the whole idea was that he really just wanted to play, it was a win/win situation but he still wanted to try out to see how he would do.

As tryouts loomed closer, he was starting to panic a little bit about all the snow we’ve had, because the coaches mostly recommended practicing with the ball against an outside wall (and then catching, obviously) to get ready, and he wasn’t able to do it more than about twice.

I kept telling him that he would get to play, regardless, and that we were proud of him no matter what team he was on, and that all three teams do play for the school so whatever.

I took him to tryouts last Saturday. They took place in an indoor soccer facility, and it was crazy crowded with Lacrosse teens as well as little kids who were there for soccer games. The fifteen-year-old was semi-confident even though he had no idea what to expect. There was a group that was to tryout before his time, and we went to watch. When he saw them run the first individual drills and how fabulous the first boys were, his face went white and he said to me, “Oh. This is going to suck.”

I did my best to pump him back up a bit, but if you can remember being a teenager, you’ll remember that in times of “crisis” you’re not likely to listen to anybody who is trying to tell you that it’ll be alright, let alone your well-meaning mom. He and I sat in the bleachers and waited for his group’s turn, and I grew more and more nervous for him as his time got closer.

Finally it was his group’s turn. The coaches set up the cones for their first drill, and the boys started going through it. When it was his turn, I kept fingers crossed on both hands (under my coat so nobody would see the dorky mom wishing upon a star), and…well, let’s say it didn’t go very well. It was a real nailbiter for me to be sitting there watching him not do as well as he had hoped.

I saw one of the coaches stop him after one of his drills and they chatted for a few minutes. They were both smiling, so I wasn’t alarmed. It looked like he was giving the Kid some pointers.

All I could think about was how badly he wanted to do well. This kid had really, over the past 10 months or so, taken the initiative to learn this sport. He has worked so hard, and he has taken all of his various coaches’ suggestions to heart. I hoped with all my might that he would improve in these tryouts as he just seized up from nerves on the first two drills.

By the time they had some scrimmages, I could see him relaxing. He loves the game, and he is quite aggressive and fast. I hoped that the coaches could see his potential and give him a chance.

After the hour-long tryouts, he changed his shoes, took off his protective gear, and we left. It was mostly a quiet ride home. He said that he had just been so nervous, and that the coaches kept trying to tell him things while he was trying to play and he didn’t understand why they didn’t know that he couldn’t absorb all of that while he was running around. I gently told him that “Coaches do that: it’s their job, right? It’s why they are called COACHES…they coach.”

“Oh yeah,” he said, “of course…” and his voice trailed off as he realized that he really was supposed to listen to their “real time suggestions”.

Knowing that he would be on the F/S team regardless, I filled out his registration paperwork. We would get the e-mail announcing who made the JV and Varsity teams on Sunday evening. It would be a long 24 hours.

On Sunday afternoon, I checked my e-mail constantly. What the heck was taking so long? Finally, around 5:30 p.m., I got it.

I want to thank everyone for coming and trying out for Your High School Lacrosse.

Please note there is a mandatory Parent/Player Registration meeting, tomorrow, February 25th at 7:00 PM. This is for ALL parents/players new and returning.

Here are the items that are you will need to bring to the meeting:

1. Signed Code of Conduct form and Criteria & Permission Form
2. Registration Fee check
3. Uniform Order form if you need a uniform.
4. Apparel Order (optional)
5. Yard Sign and Decal order (optional)
6. Your Personal Calendar – Volunteer sign-up sheets will be handed out – Each family is required to volunteer to help out at the home games.

Congratulations!!! I look forward to seeing everyone on Monday night!

OMG, I thought I was going to pass out. HE MADE IT! I ran upstairs and screamed for him like a Wild Woman.

At first he didn’t believe me, but he wanted to, so badly.

I took him downstairs and showed him the e-mail. High fives commenced and we were screaming. I even got a little teary-eyed. I was so proud of him at that moment, and so happy for him that his hard work and persistance were rewarded.

Now it’s practice every weekday after school until May. I’m sure I’ll complain a little about all the driving because he gets home from school at 3 and practice is at 4 (it’s very near to our house as opposed to near his school 8 miles away), but I’ll have to remind myself of the happy day he found out he made the team to temper my complaints.

And away we go! 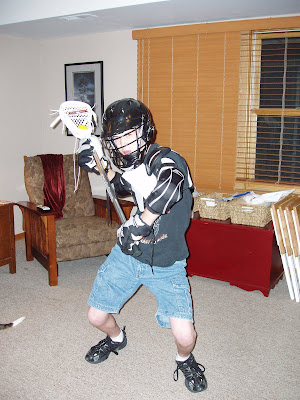 This photo was taken last spring on the day his Dad took him to purchase his equipment. It was the start of something really cool…