Post-Party Depression Sure Made This Week Fly By…

Yes, you read that right: Post-PARTY depression. I keep thinking about finishing up on my Bar Mitzvah summary posts, but this week has been so busy for me between getting my house back to normal, having the 13-year-old home sick with strep throat Monday and Tuesday (don’t get me started) and subbing a few extra group cycling classes…I’m exhausted just typing about it! I’m going to do this post as quickly as possible (forgive any typos!), because I want to work on a magazine article this afternoon: this is my first free couple of hours in a week or two!

I still don’t have access to the photos taken by our family’s very own Annie Leibovitz: gimme (and her) a break, it’s only been 6 days–but at whatever point I get them from her I will definitely do a little photo montage post. You’ll just have to wait!

In the meantime, I will summarize the high points of the service in this post and write about the party on Sunday or Monday. (I’ve got Scrolling Saturdays tomorrow!) If you didn’t read my first post about it containing what we handed out on Saturday in “program form”, you may want to read up on it first, here. That will give you all the “nuts and bolts” info about it.

Here are the things that stand out in my mind:

1. I felt very calm in comparison with the older boy’s Bar Mitzvah in 2005. I guess I knew what to expect this time. Both boys were, on their day, quite prepared and though nervous, very composed. I was NOT–the first time. This time was a much more relaxing experience as the proud mom.

2. Seeing all of our guests arrive at the synagogue gave me such a warm and fuzzy feeling. Family, old friends, new friends…it was so special to share this day with them.

3. On Friday night, the Bar Mitzvah boy had been a little freaked out when he first stepped up to lead a prayer. On Saturday, he was like a pro from the get-go. I started to get emotional immediately.

4. It was when Jim and I stepped up to the bimah to present the boy/Man in Jews with his prayer shawl that I started to really absorb everything. 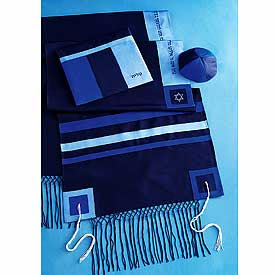 This is really the one (but the photo was not taken by us): his grandma and grandpa bought it for him.

5. He totally knew what to do and what to read, at all times. In fact, the Rabbi was getting ready to tell everyone what page to turn to right after the boy did a prayer, and the boy didn’t even wait for that: he just kept on going.

6. He was THRILLED beyond belief that the Rabbi wore the duct tape kippah he made. When he first started selling them to benefit VH1 Save the Music, the Rabbi bought six (wallets and kippot). The following week, he told the boy that if he would make an adult-sized kippah, he would wear it. He handed the boy $20. When the boy said, “They only cost $3; you don’t have to give me that much,” the Rabbi said, “Don’t worry, we’re going to work on it.” He was right, that’s for sure. For the next six weeks on Sundays there were fittings, color consultations, and general pointers. As it turned out, the Rabbi was having him put on certain colors so it would be a prop for his response to the boy’s teaching on Saturday. 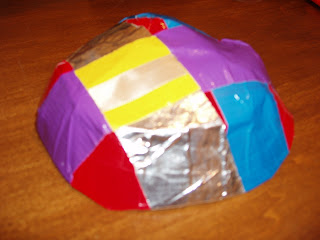 Later we’ll have a photo from Aunt Julie with this actually on his head, but this will do for now.

7. During the part of the service where the generations pass the Torah down to the boy, I had to mix it up a little bit. It is a very serious (but bittersweet: he’s growing up!) part of the day. The way we do it at our temple is: the grandparents and parents go up to the bimah. The Torah is taken out of the ark, and handed to each family member. While holding the Torah, the person whispers something into the boy’s ear about how proud they are and such. Nobody out in the seats can hear (unless the kid forgets to turn his mic off: which mine did NOT forget to do). During this time, the Cantor and the congregation are humming a song. To give you an idea of the bittersweet mood, check this wedding scene out from “Fiddler on the Roof”.

Yes, this Torah moment is VERY “Sunrise, Sunset.” With the older boy, when it was my turn, I told him I was proud of him but then made him laugh because I quoted the scene from “Elf” when Buddy is singing to his Dad, “And guess what? I love you, I love you, I love you, I LOVE YOU!” It was pretty funny and a nice ice breaker. This time I was trying to think of something to say that would have the same effect.

The boy LOVES stand-up comedy, and one of his faves is Jim Gaffigan. I decided to sing “Hot Pockets”, like Jim does at :56. It was a big hit. LOL

8. As he read his Torah portion and the Haftorah that accompanied it, he didn’t miss a beat. Well, once he did get tripped up halfway through a word, but jumped right back on. This kid didn’t need ANY nagging to practice this entire year, and his preparation shone brightly.

9. After his brain was surely mush from all of that outstanding Hebrew chanting, he still had to do a speech that taught us all something about his Torah portion. I was so proud as he read the speech he worked so hard on. He read it at a great pace that was easy to understand, and people really seemed to be interested, which is always a plus!

10. The 2 hour and 15 minute service flew by for me. I’m so glad we videorecorded it. I hope to post snippets sometime in the future…

11. After the service, it was time to party down! You’ll get that story in a couple of days!

Next post: The Grocery Store Can Be Soooo Romantic