An Ugly Cake For a Handsome Kid

So the THIRTEEN-year-old’s birthday went well on Sunday; very low-key. I didn’t expect much fanfare, considering we had the birthday lunch last weekend at the Signature Room and this coming weekend is the big Bar Mitzvah. It was a nice day.

Aunt Joodie/Doody/Juzie/Jooie came over and we made homemade pizza (using our cousin Eric’s dough recipe: it’s a winner!) for dinner and had assorted appetizers too. We were the only home, apparently, in America that did not watch the Super Bowl. Instead, we watched the Brian Regan DVD.

Then of course, it was time for Rainbow Cake. I had asked the boy on Saturday if he wanted me to make him our family’s traditional birthday cake for Sunday. It was a question because this kid does not go ape-wild over cake in general, and I thought he might have just wanted ice cream. But he gave me the go-ahead on the cake and so I made it for him.

I baked it Saturday night, late, and planned to frost it Sunday afternoon, after religious school. On Sunday, I whipped up the frosting, colored it, and started spreading it on…and the sides of the cake started to crumble. Icky. It was a mess. There was no smoothing out of this icing, no covering of the crumbs. They were just going to have to become part of the cake.

So…I decided to not even try hard to make it pretty. 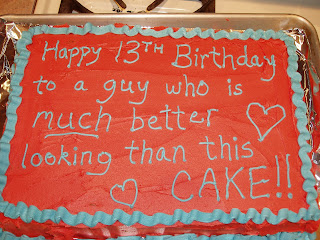 It had a great personality though, and was pretty on the inside… 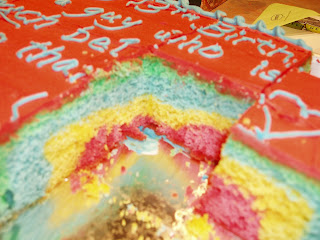 Late that night I went to do the dishes, and found a bowl that had the normal bits of melted ice cream remnants…and a HUGE square piece of cake, almost totally intact except for the frosting, which was gone. I yelled, “Who’s cake was this????”

The birthday boy answered, “It was mine.”

He said, “I wasn’t so hungry after the pizza.”

(as if that’s really an option…LOL!)

Previous post: Can Someone Please Answer This For Me???!!!