The Best Thing Ever, For Navigating Yourself Away From the Highway 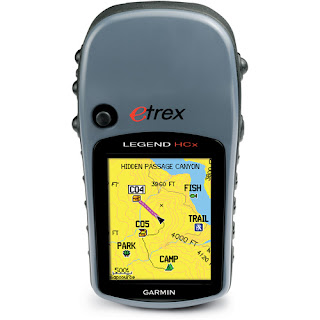 I took a roadtrip yesterday, up to the land of cheesecurds, beer, and the Packers. (Wisconsin, for those of you out-of-towners) I had a special errand to run for the upcoming Bar Mitzvah (it’s 3 1/2 weeks from now! Yikes! I can’t believe my sense of NON-panic! This is awesome!) which I can’t share yet because some of the people who will be attending the Bar Mitzvah read my blog and I don’t want everyone to know about this just yet.

Anyway, suffice it to say I had to pick something up from the north side of Milwaukee. I was so, so excited about the roadtrip. You know, on the open road, taking some time out of my own little congested suburban area to drive more than ten minutes at a time and enjoy the sights. I was a little irritated that I forgot my camera, but oh well.

I have been to this place before but the last five minutes of the trip are a little confusing for me and I couldn’t remember how to get to the final destination, so I did a map on Mapquest. It told me that it would take me about 1 hour, 59 minutes. That was fine with me. I had all day.

Jim said, “Why don’t I just program it on my GPS? That way if you hit traffic (something extremely common in Chicagoland), you can get off the highway and take some side roads up there.”

I agreed and decided that would be fun! So I threw the Mapquest map away and took the GPS that he set up for me.

After teaching my group cycling class I quickly changed clothes (Have you ever spent the entire day in your icky workout clothes? I don’t recommend it.) and got on my way by a little after 11:30.

I turned on the GPS and it gave me two options: Fastest Time or Shorter Distance. I chose the faster option because although I was truly in no big hurry, my main thing was trying to get back to my cozy suburban area before rush hour.

Surprisingly, the GPS told me to take a two-lane highway rather than the major interstate. “Okay,” I thought, “I’ll play along. Let’s see where this thing takes me.”

I looked ahead in the directions it was giving me and I was NEVER going to be on the major highway. “Hmmm,” I thought, “That’s suspicious. Oh well.”

So I took the two-lane highway north and smiled as I passed by the area where my aunt and uncle live. Randhurst Mall has done something wonderful: they repainted their water tower; it’s GORGEOUS! How often do you see those painted up that nicely? 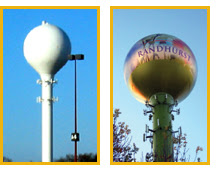 Before….. and After. The photo doesn’t do it justice.

I passed through Vernon Hills, where I used to commute from Kenosha, Wisconsin (40 minutes), just to do custom framing at Lee Wards Craft Store.

I passed by Long Grove, a great little town full of neat shops. North of Long Grove I saw some amazing homes–no, they were really mansions. Spellbinding!

As I drove further north, the congestion I am so used to started to ease up. Gradually I saw more space between buildings and less cars on the road. As I crossed over streets whose names brought back memories for me, I knew I could cut east at any time and find the major highway this GPS just didn’t want me to see. I was tempted, but I stayed the course. I eventually crossed over the state line and was in Kenosha County. So many memories! Both of the boys were born there. I crossed over Highway 50 and checked out the farmland that was spreading itself out from the road. By this time there were hardly any buildings other than farms, and no businesses in sight; nothing but land that was hibernating until the spring plantings.

I looked at the time and discovered that it had been almost two hours by this point, and I knew I was still about 25 minutes from Milwaukee. What the heck? Why does this GPS think this is faster than the interstate???

Repeating that I was in no hurry, I travelled on. I passed through Franklin, where my parents lived for several years. The GPS took me off the two-lane highway, finally, and I was on familiar roads that I frequented when visiting my parents.

I finally reached my destination at about 2:15, right around the three hour mark. I picked up what I needed and got back in the car. I totally knew my way home, ON THE MAJOR HIGHWAY, and decided to take that way in order to save time. I wanted to see, though, what the GPS recommended. Turning the GPS on again, I selected Faster Time and then Shorter Distance. Neither choice gave me the major highway. I left it on anyway.

As I made my way home, the thing kept on telling me to do a U-turn as soon as possible and get off the highway.

“NO!” I snapped. (Yes, at this point I am now talking to the GPS) “Stop beeping at me! I am not getting off the interstate!”

I hit traffic about 20 minutes from home, so I decided to pay attention to the recommendations of the GPS. I got off the interstate and that thing took me practically in circles to get home. I ended up turning it off, calling it Stupid.

When I spoke with Jim on the phone and told him what happenned, he said, “Hmm. Maybe it’s not set for highways; I’ll check it when I get home.”

I was thinking that would have been a good idea in the morning, but: no worries.

When he arrived home, he turned the GPS on.

“Uh…well, it was set for BICYCLES and not cars.”

Good thing I wasn’t in a hurry!

Previous post: Another Example of Me Being Stuck in the ’80’s