No View From the Top 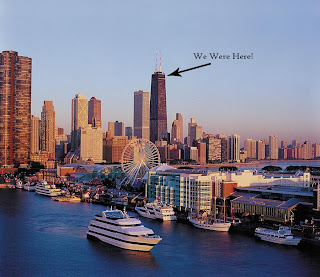 Yesterday, we continued a family tradition that started in June 2005. What is it, you ask? Taking our kids to a very special place for lunch to celebrate their 13th birthday: The Signature Room on the 95th Floor of the John Hancock Building, in downtown Chicago. Truth be told, we not only continued the tradition yesterday but also did it for the last time, since we only have two kids and will not give birth to any others, but let’s not get that technical!

Eating at the Signature Room is a real fine dining experience. Also, as you can imagine, it’s very upscale (read: pricey). The service is fabulous; they are very attentive as you would expect. The restaurant itself, besides having normally gorgeous views of Chicago, is decorated in an Art Deco style, which I love. Of course the food is spectacular as well. We celebrated our anniversary there in December 2001 (a slightly unnerving experiencs, as 9/11 was still fresh: we were a little freaked out about being at the top of that building!) and had a lovely dinner. Even with the gift certificate Julie bought for us though (thanks Julie!), it was super, super expensive for our budget. But we still wanted to go back. What to do, what to do?

Enter the Lunch Option*! Yay! Here’s an insider tip for you Chi-town people. Lunch is, though not as reasonable as, say, TGIFridays, pretty reasonable for the experience! They offer children’s options for $10 and other things (like burgers and other sandwiches) for $12 and up. A word to the wise, from the wise: don’t make the same mistake I did when taking the kids for the first time and not asking if they offered free refills on soda. We spent about $25 on soda that day…Ooops!

*Other options include: going to the Signature Lounge on the 96th Floor for drinks as well as snacky “bar food”, or going to the Hancock Observatory on the 94th Floor if you just want to have the View minus the Food, but honestly: it’s $12 per adult and $8 per child aged 5-12. Why not pay a bit more to have some good food??

The last time we went, it was a gorgeous summer day and the views were plentiful. Yesterday, not so much. There was a little blizzard going on up there, though not on ground level. The clouds kept moving in and out of there and it was very gray outside. But…we didn’t go there JUST for the view. Lunch was delightful! Of course I have pictures, and I also pulled up some from our last visit.

Here’s the little logo for the restaurant. Isn’t it cute? 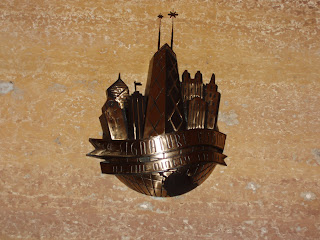 Here are a couple of photos of the decor. Love it! 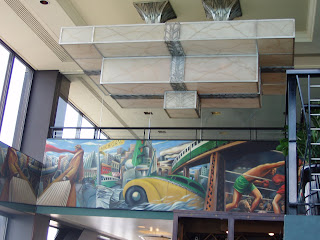 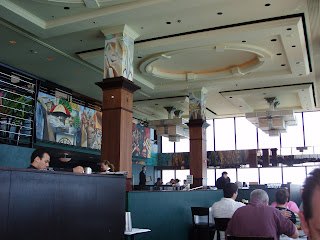 Here’s the view as it was three years ago: 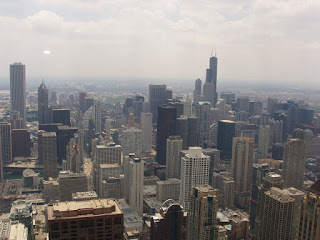 Here’s the view as it was yesterday: 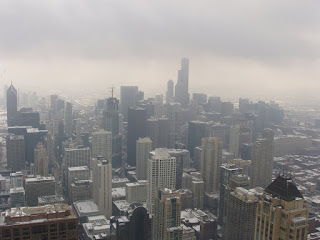 Here’s the view of Navy pier as it was three years ago: 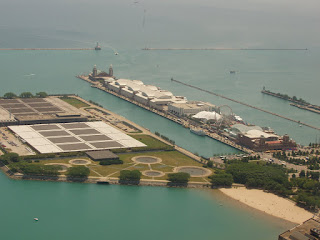 Here’s the view of Navy Pier as it was yesterday: 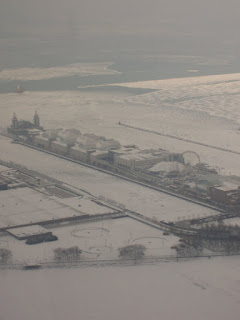 You know those crossbar looking things on the outside of the building? Yes, they’re structural, and they are part of the restaurant. 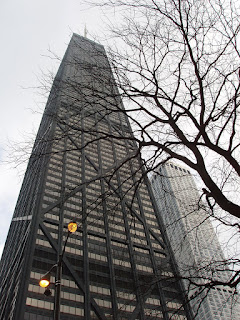 The fifteen-year-old actually bumped his head on the building. He hurt his noggin a couple of times, but of course we all laughed. 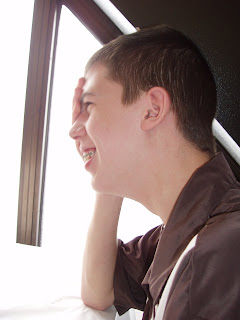 We even sat in the same order at the table as last time. Here we are yesterday: 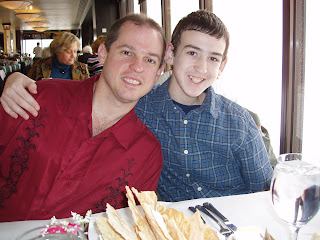 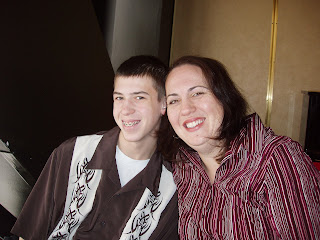 Here we are, three years ago: 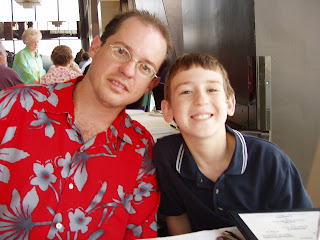 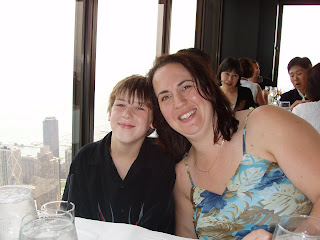 Gotta love it when you get a personalized dessert for your birthday. Here’s three years ago: 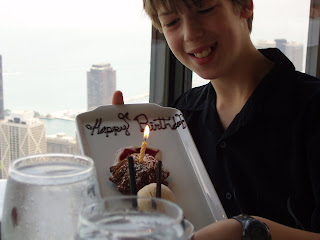 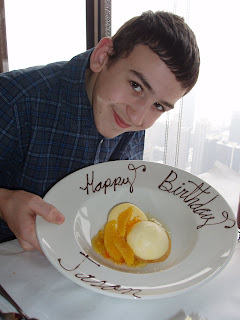 The almost-thirteen-year-old had citrus cheesecake (above). Jim had apple crisp: 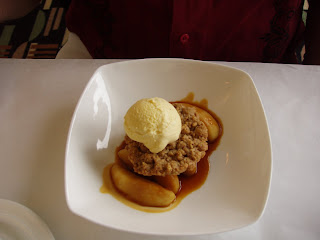 The fifteen-year-old had molten chocolate cake with port wine reduction and whipped cream: 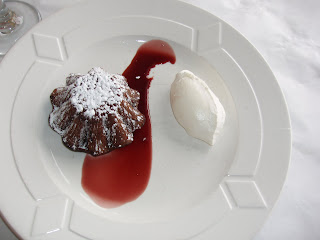 I had vanilla bean creme brulee. I can’t stop thinking about it and am considering buying a kitchen torch so I can make it at home. 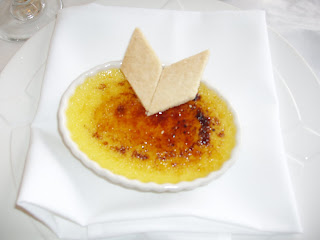 Then it was time to go home! We walked back to the car and I finally got to take a photo of this statue that has creeped me out for several years. See that “man”, hailing a cab? That’s no man, that’s a statue, baby, and it’s in front of the Four Seasons Hotel. 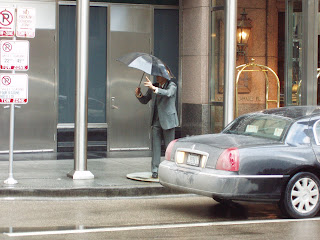 In a Chicago winter, you have to be careful on the days when things start to thaw just a bit: people have been killed by ice falling off the buildings! 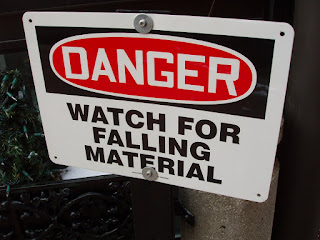 We also stopped at Tails in the City, a luxury dog boutique, where I had a major shopping spree for Roxie, in my own mind. (I never could have gotten away with buying any of the stuff) They had toys like a “Chewy Vuitton” squeaky purse and such. Lots of designer dog clothing, and of course, swarovski crystal initial tags. I wanted to take photos inside, but figured I’d get in trouble. The place was so small, there was no way I could even use my stealthiness. 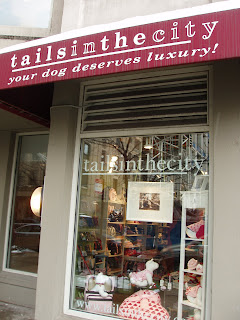 Previous post: I Can Finally Justify Reading All the Celebrity Gossip…