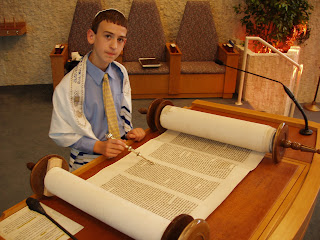 *I did not take this photo in the future and bring it back on a time machine in order to post it; this was the photo session we had for the invitations!

We’ve been quite busy lately: what else is new, right? But I’m not just talking about day-to-day life; in fact, we have a major event coming up on February 9 for which we have been working on several projects: The twelve-year-old’s Bar Mitzvah.

(If you aren’t sure what a Bar Mitzvah is but never wanted to ask anyone, click here to learn more!)

When the older boy became a Bar Mitzvah in July 2005, it was the culmination of a full year of obsessing, worrying, and working on homemade stuff to make the reception more personal (invitations, centerpieces, place cards, etc.). We were not finished with all we had to do until hours before the event. But all that obsessing and worrying was completely unnecessary: turns out, the day was *almost* perfect, with the exception of some behind-the-scenes reception stuff that our guests weren’t aware of. The then-thirteen-year-old did a fabulous job at the temple, and it was a proud day for all of us.

This time, we are still making a bunch of stuff, but the obsessing and worrying is gone. The twelve-year-old is practicing without being nagged, and we’re due to get all preparations completed about a week before our family comes to town. It’s almost like having the second baby: the attitude is totally different. I’m not sterilizing the pacifier that was dropped on the floor this time; I’m just licking it and then sticking it back in the baby’s mouth.

Of course, I will post photos and give you details of the day when it happens, but for now, Mum’s the word on specifics, so my blog-reading guests can remain in the dark for a few more weeks.

In the meantime, enjoy this “Behind the Music” parody of Miles, the son of writer Amy Krouse Rosenthal, a local yokel who, among other things, wrote Encyclopedia of an Ordinary Life. My sister actually won a quiche–baked by Amy–a couple of years ago. It was delicious. Anyway, Amy and her husband created this hilarious send-up to commemorate their son’s special day:

Next post: I’ve Just Had the Giddiest of Conversations…