Here’s a Multiple Choice Quiz For You…

After spending most of yesterday on the couch with my sinus infection and feeling so much like doodoo that I skipped my workout, I wanted to try to exercise today. I have taken (only) two doses out of 20 in my course of antibiotics, I have used the prescribed nasal spray, and I ate a good breakfast.

Answer this: Knowing that it wouldn’t be a good idea to overdo it even though I feel a bit better today, I did which one of the following?

A. I skipped the workout again. No sense in taking two steps backward! The opportunity to exercise will be there again tomorrow.

B. I decided to fit in a light resistance workout with the new Bowflex, skipping the cardiobox portion that I was looking forward to.

C. I decided to throw caution to the wind and strap on my new snowshoes, and then take Roxie for a heartrate-busting 40-minute excursion on the golf course that runs alongside my street.

And thus sums up something very, very important about my personality, though I don’t know what…

Oh wait, yes I do. You can’t keep a Good Woman Down.

Either that or: I’m a Dumbass.

The fifteen-year-old brought Roxie over to the fairway for me (it’s only across the street and three houses down from ours) after I had a chance to strap on the snowshoes for the first time and adjust to walking. I had him take a few photos for everyone’s enjoyment. I zipped my cellphone up in one coat pocket and my iPod in the other, and I was ready to go. I contemplated making a playlist before I left the house so I wouldn’t have to mess with skipping songs as they came on, but I decided to be satisfied with whatever came on “shuffle”. (mistake!)

I have to say, Roxie was quite shocked when she realized that she would be “hoofing it” in snow that was a few inches deep and there were no shoveled areas on which she could trot: 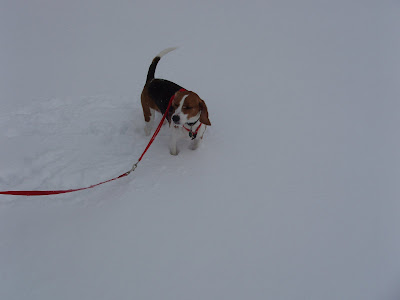 After a minute though, she was ready to go! 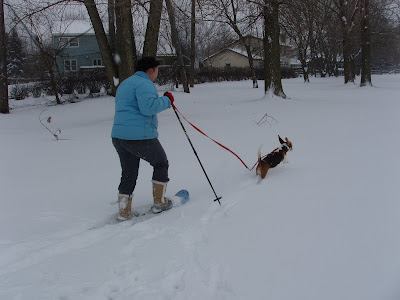 Away we went, bolstered by the motivating (not!) Pat Benatar and her tune “We Belong”. Ugh. Whose dumb idea was it to NOT make a playlist? Oh yeah. Mine. (I mean, gotta love Pat Benatar, but it wasn’t exactly motivating snowshoe music…) We walked and walked and walked. I learned that if you are wearing snowshoes, it’s not a good idea to “climb” a snowdrift- or a hill-looking thing, because you will fall on your butt and almost release your dog’s leash from your wrist. Good lesson.

We kept walking as my iPod seemed to play a cruel joke on me, choosing the most non-motivating of workout songs, like “Hold Me Now” (Thompson Twins), “Ironic” (Alanis Morissette), and “One on One” (Hall & Oates). Finally I got a little Shakira and then some Eminem, and I picked up the pace.

One of the backyards we passed repeatedly as we walked back and forth down the fairway was the home to two dogs who barked excitedly at us whenever we were near, and she–of course–howled back. I laughed as I imagined what they might be saying to Roxie:

Roxie: “I KNOW! She’s nuts! She spent money on these shoes and poles…the regular walks were fine! But no thanks on the cocoa, this is actually fun! I might come over later though, if she falls again and I can get away!” 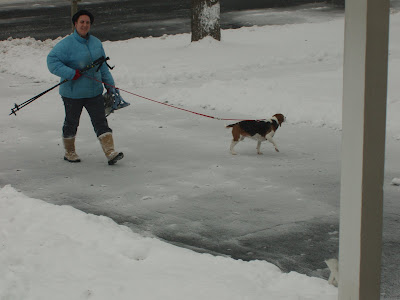 It was a great workout: very fun and I’m glad I bought the shoes. I think Roxie was glad, too. But she was even more glad to get home after 40 minutes, though she had tiny little balls of snow all frozen and hanging off her chest, belly, and neck. One little shake and they all came off, all over my carpet. Oh well.

We’re taking the rest of the day off…time to go relax on the couch!

P.S. A shout out to Katie of Made in Melbourne, who is sweating her butt off in the land Down Under! LOL