The Case of the Missing Backpack 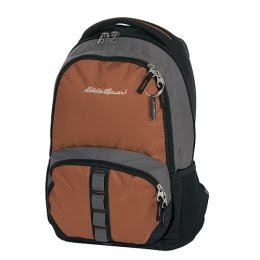 So…where was I? Oh yes, my mini nervous breakdown.

On Sunday of last weekend, Jim suddenly came down with the flu. Ick. Sunday also happened to be the day I wanted us to go to the mall to get new clothes for all four of us, because we are all running thin on jeans and wintery tops (I know, I know: girls wear “tops”; boys wear “shirts”, but I’m including sweaters and sweatshirts in that blanket term). I decided, due to my chronic time-crunch, to just take the boys and we’d pick up stuff for Jim (I’m lucky in that he doesn’t mind when I shop for him!). First stop? Old Navy. Fleeces for $10! Are you kidding me???? We left as happy campers and then made our next stop: JCPenney. Love that place. In fact, JCPenney was one of the first corporate “logos” that the twelve-year-old recognized (as a toddler) from his car seat.

Anyway, we found so many deals at Penneys it was unbelievable. I was carrying so many clothing items over my arm (and hangers on my fingertips) that I actually pulled a chest muscle. WHO DOES THAT? (Apparently I do.) It’s a good story anyway. I won’t say exactly how much I spent (a lot), but we ended up getting more than 60% off of everything we bought at Old Navy and JCPenney, so we celebrated with a soda at Steak n’ Shake.

Pulled muscle and all, I spent the next two days (Monday and Tuesday) taking care of the house and a sick husband—who actually stayed home from work: that’s how sick he was—while at the same time feverishly working away on our holiday cards, which I wanted to get mailed out already, for goodness’ sakes.

On Wednesday, I spent two hours early in the morning finally finishing the cards, and got them mailed out. I arranged to have someone else work my afternoon shift because I was getting really stressed out about the condition of my house and the amount of things I was behind on.

Around lunchtime, Jim came home because he felt like doo-doo. He made a doctor’s appointment and got some antibiotics for bronchitis. I had to teach my group cycling class that night, so I fell further behind, and was by now totally stressed because I had to work Thursday and Friday.

Cut to Thursday: Jim was back at work but not feeling much better. I worked til three, took the twelve-year-old to his Hebrew tutoring, and did a drive-by at Julie’s J-O-B to grab the Bar Mitzvah invitation materials from her car. At 7 p.m. Thursday, after feeding the family, I began cutting, assembling, and stuffing the Bar Mitzvah invitations which I needed to mail ASAP since we have only 7 weeks left. I sat on the floor for the first 3 hours or so, with my trusty Fiskars paper trimmer and everything else spread out around me like one of those big poofy dresses in the movies. (I only WISHED I were actually sitting there in a dress, doing nothing but waiting for a mint julep!)

Wait a minute: just forget about the dress simile. I must still be delirious.

The kids went to bed, and Jim went up shortly thereafter. I continued working, watching Project Runway (It’s AWESOME this season!!!!! Poor Jack!) while I stuck address labels on the envelopes and stuffed all the right pieces into the right envelopes, finally finishing at 1:15 a.m.

Friday: The Fall of the Melisa Empire. Everything begins to crumble because of my exhaustion. Jim? Still sick. My hands? Feeling arthritic due to the amount of time I spent using my small motor skills. I got up at 5:45 to get the kids going (the high school bus picks up at 6:35 a.m. and the middle school bus comes at 7:30 a.m.) and then had to get ready for work.

Work? Over the top. The salon is absolutely insane on Fridays. I juggled my usual 100 action items while writing up gift cards and ringing up retail items (holiday season, you know). There were minor irritations at work all day, but nothing I need to put out here in the blogosphere…

The twelve-year-old has guitar lessons on Fridays at 4:30, so I had to leave work at 3:45 and run home to grab him, drop him off, go to the grocery store, pick up the dog from Daycamp, and pick up the kid again. By this time I was crashing because I was so tired. Upon arriving home, the fifteen-year-old said that his brother had something to tell me.

When you get prepped like that, it’s never good news.

I called out for my younger one and he told me that he lost his backpack…on the school bus. Wha???? WHO DOES THAT? (Apparently, he does.) His story was that, when he sat down, he put his backpack on the floor and when the bus moved, it slid away. He couldn’t find it anywhere when the bus stopped near our house. He seemed only a little concerned, because the bus driver told him if she found it, she would drop it off at school on Monday morning.

Not only did I just buy that backpack on Monday night, but in it were the following items:

(NOTE: for those of you who are unfamiliar with the American Middle School—and I don’t know if they all do this but in this area they certainly do—middle schoolers carry all of their papers from all classes for the entire semester in a binder, so everything is all together at all times. It’s supposed to help them stay organized.)

I think I started to hyperventilate a little bit and had a minute to call the bus company, who didn’t find it and wouldn’t call the bus driver for me to see if she had found it.

When I hung up, the fifteen-year-old was talking to me about Nintendo DS, which he had saved for and was planning to purchase for himself. He was telling me about some game or something, and the whole one-sided conversation was glaringly out of place at that point of my day.

I threw up my hands (figuratively) and said, “I just can’t deal with all of this right now! We have to get to guitar lessons!!!”

I sat in the recliner that evening, completely stunned and wiped out. It was a true “I’ve given all I can give” kind of day. I’m glad it’s over. More on the backpack caper later!

Next post: Does Ask.com Offer the Answer to This Question?