So, finally the story of our traditional Hanukkah-palooza! Our little family of four has many traditions. One of the most important ones to us involves another family who is very, very special to us.

Background information: We used to live two houses away from this family in a neighborhood just about 2 miles from where we are now (we’ve been in this house for 7 years now). Although we only lived in that other house for about 2, maybe 2 1/2 years (we were renting), we met this family who will be friends for our lifetime. There are seven of them (the five kids ranging currently in age from 7 to 22) They are without a doubt some of the nicest, most fun people we have met in our *almost* 21 years of marriage.

*They have lived all over the world.

*They are very, very down to earth.

*They have a great, no-nonsense approach with their kids, which we try to maintain here as well.

*They have, since we’ve known them, kept us in awe of their ability to juggle the extra-curricular activities of five kids.

*They have included us in their family celebrations, even when their relatives are in town.

*My fifteen-year-old “learned” to eat salad at their house when he was little (he never touched it here), as well as “how to swing” on a swingset (That’s another story in itself).

*My twelve-year-old got started on learning how to ride a bike with them.

*Although they are Catholic, they sent their daughter to the Jewish preschool with my younger son because they loved the program and the teacher.

*The Mom ended up becoming a teacher’s aide at that same preschool, and their youngest boy ended up attending there, too!

*Until this year when my boys didn’t want to trick-or-treat, we have spent Halloweens walking around the neighborhood together. (Sad this year!)

*Whenever they are around, almost all that can be heard is laughter.

I could go on for hours, but this post is supposed to be about Hanukkah!

On to the tradition this post is about…
For many, many years, we have invited this family over to our house for a dinner of latkes (potato pancakes), blintzes, and noodle kugel. (The latkes are traditional Hanukkah fare: anything cooked in oil–ugh–is special to the holiday) They always always always bring the jelly doughnuts (also a traditional Hanukkah food) for dessert. The kids play dreidel, the adults chat and laugh, the house gets full of smoke from all the grease, and it’s just generally a great time. This year was no exception, especially because we didn’t get together for Halloween! Great friends are priceless. Here are the preparations for the evening, in photos.

Roxie is dressed up in her holiday finery: 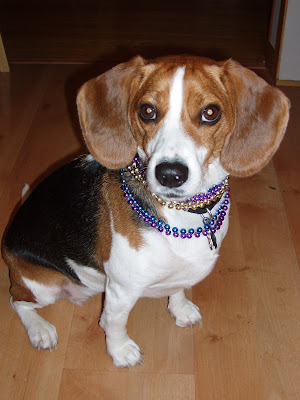 Here’s me, in my “holiday finery”, ready for some cooking action (courtesy of my in-laws, who embroidered the apron): 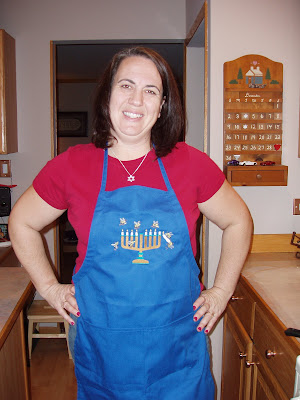 The blintzes have to be started early because there are several steps. First you have to make the outside shell which is like a pancake. I mixed up the batter and commenced cooking them up: 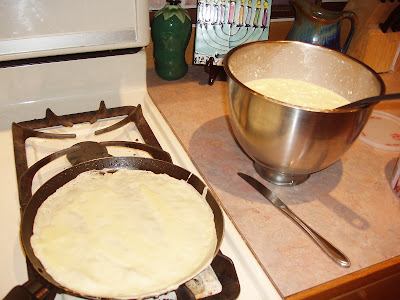 You can lift the edge with a knife to see if it’s browning on the bottom (you only cook up the one side): 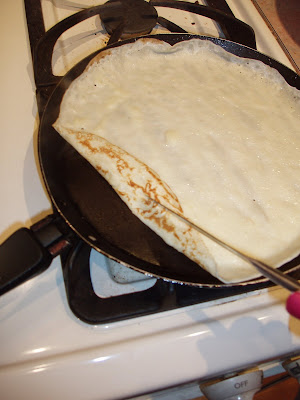 In the meantime, Jim cuts onions and potatoes to shred in the cuisinart for the latkes: 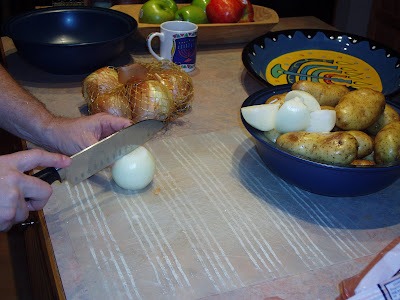 After browning the bottom side of the blintzes, I flip them out onto some wax paper I have covered the counter with: 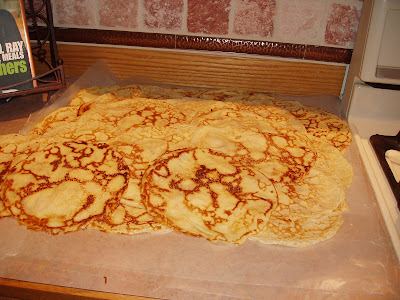 Just like my Momma does, I uphold the tradition of a two-pan operation. I’m flipping crepes out onto the counter for about 90 minutes, to make sure I have enough for dinner and for freezing (Julie couldn’t make it on Saturday so we’re having Hanukkah dinner with her this weekend!): 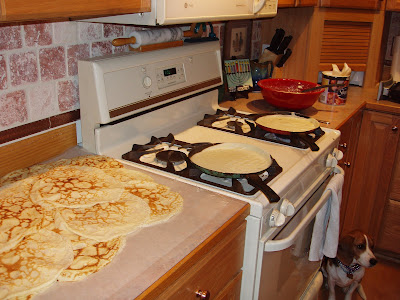 Roxie waits for me to drop something, ANYTHING: 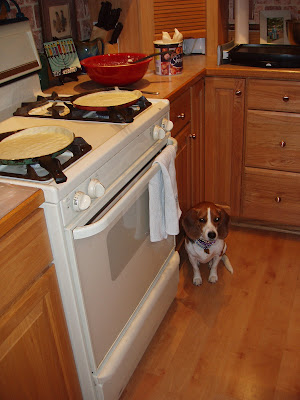 After I am done with the browning and flipping, I fill some of them with a cheese mixture and some with jelly. Then I fold them up and get ready to fry the outside! 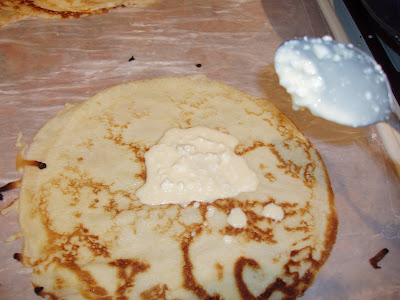 Here are the latkes, side one: 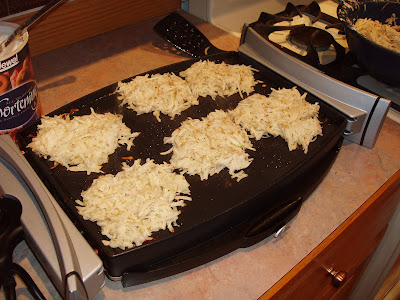 Side two (I’m getting hungry all over again): 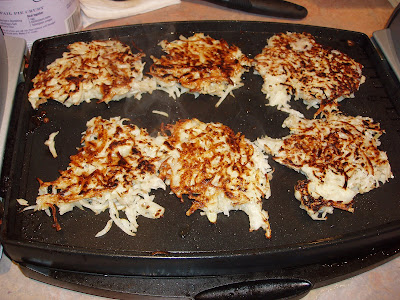 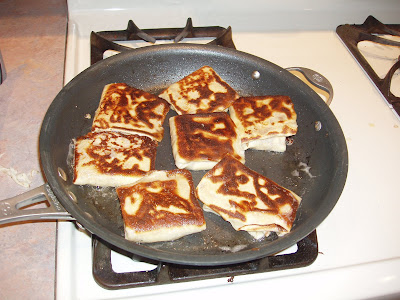 Of course, the house was too smoky and we were having too much fun eating for me to think about taking photos during dinner, but trust that it was delicious. The kids played dreidel for Starburst candies: 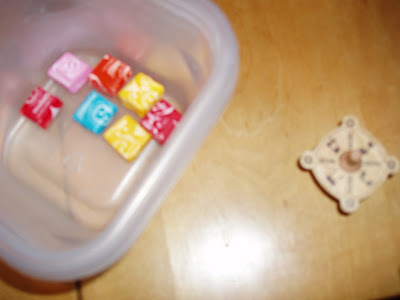 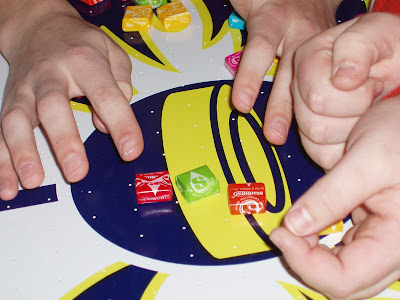 We lit the candles, ate our jelly doughnuts, and everyone rolled home after another successful Hanukkah-palooza! 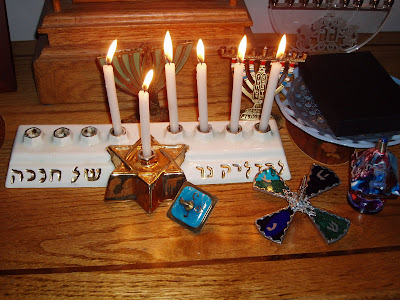 Next post: I Have Always Wanted to Have Something in Common With The Osbournes and Jessica Simpson…

Previous post: Pink is the New…Awww, It’s Just Pink For This 12-Year-Old