Hanukkah at the House of Jules 2007

I nearly forgot to post about our Hanukkahpalooza at the House of Jules last weekend! This will be brief: we had lots of fun, blah blah blah, the end. Just kidding.

But we did have fun! And we ate too much! (What else is new?) We made fresh potato pancakes (latkes to you fellow Jews out there) but used the extra blintzes I made the weekend before, thank goodness–because that was hours of cooking! It was so yummy, I wish I could have sent all of you out there a little sample.

After dinner, we commenced with the gift exchange. That’s always a good time in our family; we do a “Round Robin” from youngest to oldest and only one gift is opened at a time. It was a roaring good time, especially when the twelve-year-old opened one of his gifts from Julie: a can of potato chips. 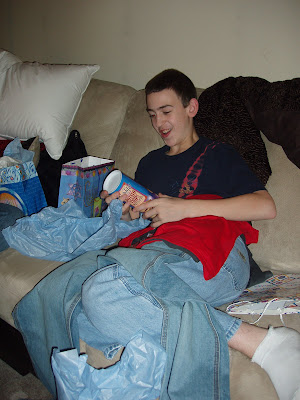 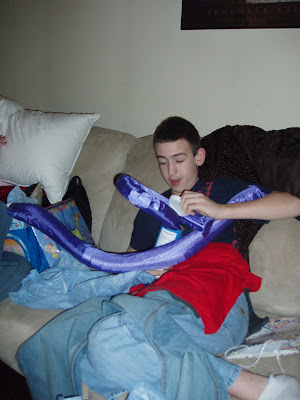 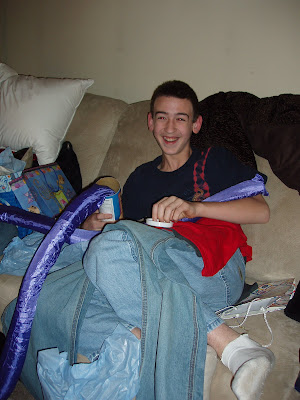 The fifteen-year-old’s favorite gift from Julie was actually something he picked out when they were shopping over Thanksgiving weekend. I have to say I was surprised by his selection, but I am happy that, as a high school sophomore, he has a sense of humor about his wardrobe: 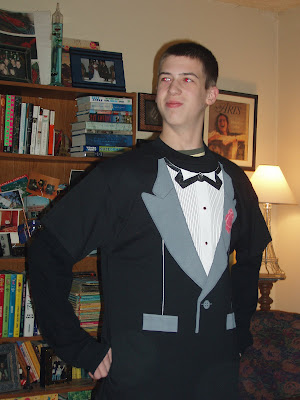 Yes, it’s a tuxedo shirt. He immediately asked me if I could get him a pair of black jeans so he could wear the ensemble to school.

Originally I wasn’t going to post any photos of the adults, but this one is just too funny. Remember when I wrote about the pillow mist Julie bought for me? Here I am, simulating the enjoyment of it as spray it on the new fluffy pillow, also from my sista. 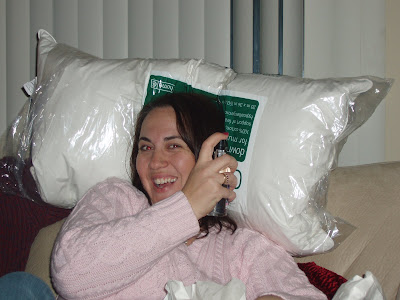 Doesn’t it look like I could go to sleep immediately?

After the gift exchange, we had to have dessert, so it was time to pull out the cake I baked: 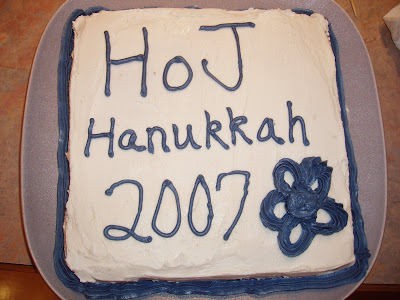 As if there was room for any more fun in the evening, we played a round of Pop Culture Trivial Pursuit. Actually it was more like 1/8 of a round, because each and every one of us sucked at it, including Julie and myself. We switched to Trivial Pursuit: Saturday Night Live Edition and actually finished the game, but it was pretty hard. When, oh when, did we lose all of our knowledge???

Previous post: Here’s a Recipe You Should Try This Weekend