You read it right: a miracle happenned!
(I would have called this post “A Hanukkah Miracle” because that is equally appropriate, but it has to do with a Christmas gift)

First of all, meet my BFF Kate, who–with this post–has now been officially mentioned on two blogs. We have been friends since high school; I’ve actually known her longer than I’ve known my husband. I have an awesome photo of her that I am dying to post here, but I won’t because she will kill me. I will describe it, though. I took the picture on a boat from Dresden Germany to Meissen Germany in the summer of 2006. We were really excited to go to Meissen, but this is before we knew just how wrong the day would turn: pouring rain, unusually crabby toddler (hers), and stolen wallet (also hers).

Anyway, back to the boat and the photograph. We ordered hot cocoa and I realized that her chocolate-brown shirt matched the white and brown cocoa cups, so I wanted to take a picture. She held the cup up and smiled as if to say, “Hurray for us and our boat trip!” The photo turned out SO GOOD; she is reminiscent of a Swiss Miss Cocoa representative. It is soooo funny, not because it’s unflattering but because…well, it’s just a funny memory for me. I have it on my phone so it pops up when she calls.

Since she will definitely put a contract on me if I post the whole thing for you, I will post a photo instead of the Frauenkirche in Dresden, the most beautiful church I’ve ever seen. (I know, I know, as a Jewish girl I haven’t seen too many, but trust that my jaw dropped when we toured this.) The story is fascinating; click here to read it. 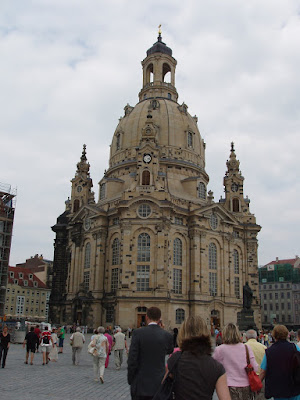 Anyway again, getting back to the Christmas miracle:

Kate lives in the south and, when she visits me in Chi-town, really enjoys eating a food that Chicago is famous for, at a place that is famous for serving it. For Christmas this year, I decided to send her and her husband a package of it. (I love that you can do that!)

Julie and I also sent our parents a couple of things from this company; it was all ordered at the same time. I had our parents’ stuff delivered during Hanukkah and scheduled Kate’s for this past Wednesday.

On Wednesday I was strolling through the grocery store when my cell phone rang and up popped that hilarious photo that I probably inadequately described. I answered the phone: “Did you get it?”

She said, “I am SO excited! I want this for Christmas every year!”

As we further conversed, she opened the boxes and discovered the Christmas miracle: she got a DOUBLE ORDER.

How am I going to be able to top that next year?

Next post: Here’s a Recipe You Should Try This Weekend

Previous post: The Best Thing Ever For Your Pillow