Stick A Fork In Us…We’re Done! 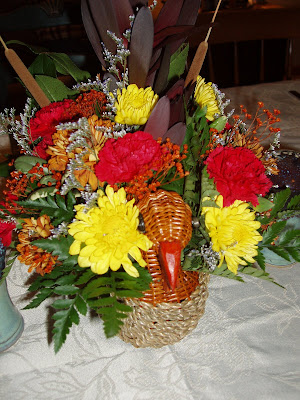 All in all we had a very successful day. Way too much food; an embarrassing amount of food. The turkey was just under 30 pounds, and there were only 11 of us planned for dinner. (12 ate, but I’ll tell you about that in a minute!) I ended up, due to a combination of my poor advance planning and our trip to Tucson, not purchasing a turkey until Tuesday night. By that time, my mother-in-law reminded me of the pain in the you-know-what it would be to attempt to completely defrost a large turkey by early Thursday morning, so I set out to buy a fresh bird. I was looking for something in the 20-pound range (for leftovers!). Turns out, the grocery store we landed in only had one fresh turkey left, the mammoth that we ended up with. (I wanted leftovers…)

Since I can remember, our family turkey has traditionally been named “Biff”, courtesy of our Dad. I know that Julie and I always attempted to give it another name, but whenever Dad referred to the turkey in conversation (like when he reported on its cooking progress or whatever), it would be Biff.

This year, since Thanksgiving was at my house, I balked at tradition and named the bird something else. In honor of my sister Julie’s passion for tall, dark, and accented men, I named the turkey Ricardo (you have to use the accent when you say it). And Ricardo didn’t disappoint: he was a big bird (no, not this kind), and he was nicely browned: 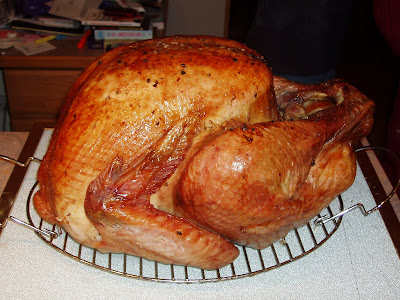 The only thing he was missing was the accent, but two out of three isn’t bad!

It suddenly occurs to me that this post is starting to look like JDate live; NO, I’m not trying to set my sister up with poultry. She deserves so much more, like a whole couchful o’ love.

Anyhoo, one of our cousins, one that we haven’t seen in YEARS (I’m talking early ’90s!) drove down to see us and chat a bit before leaving for Los Angeles and a new job. He is Julie’s age, so she calls him “her cousin” because I have one of my own (he’s “my cousin” because he’s “my age”). Anyway, this cousin and Julie have kept in touch and so we always know generally what’s going on, but it was great to get all the scoop in person, over dinner. We wish him well in his new job and his new home!

Everyone had a nice day–even Roxie, who at times was relegated to her “house” (stacked high with holiday junk, only temporarily) because of hyperactivity: 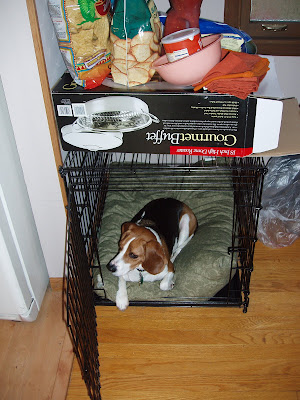 Anyone want to come over and have some leftover turkey?

Next post: If You Haven’t Tried This, You MUST.