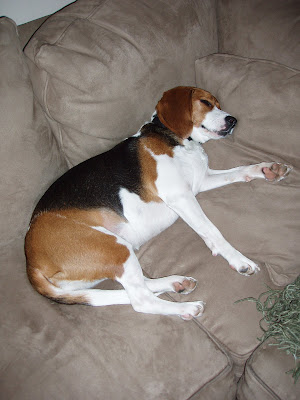 It’s 4:30 and I just got out of bed for the second time today. Yes, that’s right: I was napping. (That is not me in the photo above, by the way. That’s Roxie! tee hee) Actually, the entire family was napping! Normally we don’t afford ourselved that kind of luxury because of how busy we are, but today we just couldn’t take it anymore. (“It” being Staying Awake)

You see, last night, the fifteen-year-old had a babysitting job. It’s a difficult spot to be in, being fifteen and wanting to make money but not being able to have a “real” job because you’re a year from sixteen as well as the fact that sixteen=driving yourself around. It’s a difficult spot to be in as well, being the parents of a fifteen-year-old for all of the same reasons!

This fifteen-year-old happens to be a whiz with young children. I think it’s because from the time he was about 3 until he was in school during the day I worked at the health club nursery and, of course, he came with me. He was always bringing me diapers for the babies and playing with them and doing tricks for them; he really loved it. As he grew older, I told him often that for the parents of boys, finding a male babysitter is a joyous occasion. Nothing wrong with girls, of course, but little boys love to play with bigger boys. As a result, he grew up totally wanting to babysit. (The twelve-year-old, by contrast, was obviously one of the babies at the nursery and didn’t get as much experience doing what his brother did: and he wouldn’t babysit now for any amount of money. Well, maybe a million dollars.)

Anyway…where was I going with this? Oh yes. The babysitting job last night in relation to our inability to stay awake today. The job involved taking care of the kids belonging to a single dad who, with his girlfriend, hits the clubs occaisionally on the weekends. For that reason, we not only stay up because the fifteen-year-old isn’t home yet, but one of us goes to get him.

Last night, the dad told our kid that they would “probably” be home between 12 and 1. I, having extensive babysitting experience as a teen, know that whenever they estimate, it can be bad news for the parents who are picking up. So we sat up and waited.

You might be visualizing us literally sitting there staring at the wall, but actually we were having jumbo banana splits and watching Letterman (and then Craig Ferguson: I LOVE HIM!)

When 1:20 came, I called the kid on his cell, and he didn’t pick up. I assumed he was getting a cat nap while he was waiting for the dad to come home. I left a message: “Sooooo…have you heard from him yet? We’re just sitting here, waiting to come and pick you up.”

Five minutes later, he called and said he was ready. So I went to get him (five minute drive), and we got to bed by 1:50. And had to get up at 7 to teach my spin class. Ouch. I’m too old for this.

Which brings me to today. We actually scheduled in a family napping period, from 1:30-3:30. I HIGHLY recommend it if you are running around with a tired family. Don’t be crabby! Don’t accept the crabby attitude from other family members! Just take a nap!

I’m off…going to have an evening of non-crabby fun with the family! (We’re having a fire in the fire pit thingie with s’mores! Woo hoo!)