Before Fall Is Technically Over… 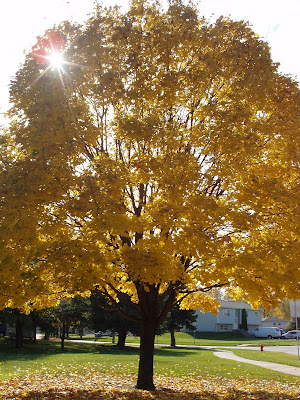 I posted this photo the other day at my NaBloPoMoFo page, but since I am fairly certain that nobody reads that page, I’m putting it up here too…just because I think it’s so lovely!

This tree is in my neighborhood (not in my own yard: wah!) and the colors were so gorgeous about a week and a half ago that I walked Roxie over there just to capture it on film.

I took photos of Roxie the Beast as well, on her cute little walking harness. 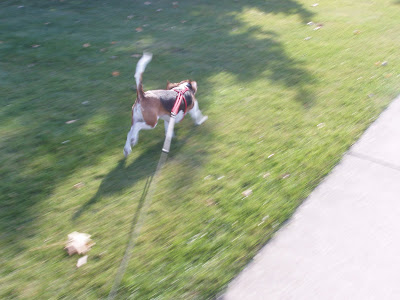 You see, when she was a puppy we discovered that she is one of those annoying dogs that pulls and pulls on the leash until she practically chokes herself to death. In addition to that, when she does finally walk without pulling, she occasionally does that annoying Beagle-asthma-attack-sounding thing. You beagle owners will know what I mean. The vet told me that it was like a reverse sneeze: she sniffs at something and gets a miniscule particle of it (could have even been airborne!) too far up her nose, and then away she goes. The snorting of it all can’t be helped, bless her heart, but between that and the howling-like-she’s-been-stabbed, I can only walk her at times of day when I’m certain the entire town is up and around.

I tried the Cesar Millan walking method and such: didn’t work well. I refuse to use one of those prong-y collars on her. I ended up choosing the harness, and it’s been great. Not only can I walk her while being 100% sure she’ll return home without choking herself to death, but also the fifteen-year-old loves to rollerblade with her. It’s the funniest thing I’ve ever seen: my 5’7″ fifteen-year-old, all suited up with his helmet, pads, and rollerblades, being pulled by our 27-pound hyperactive beagle like she’s a Husky and he’s on a sled. When the leaves and then the snow are all gone (in spring!), I’ll snap a photo and put it up here. 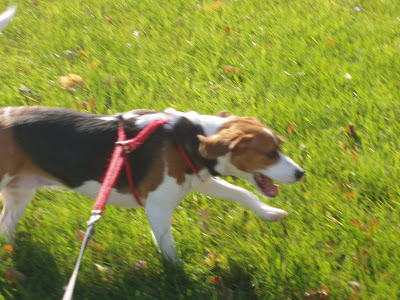 She is almost four now, and when I take her out she doesn’t pull on the harness much; she’s pretty controllable–a definite plus. My favorite part of the walk is about 20 minutes in, when she calms down a little bit and I am not having to constantly correct her. 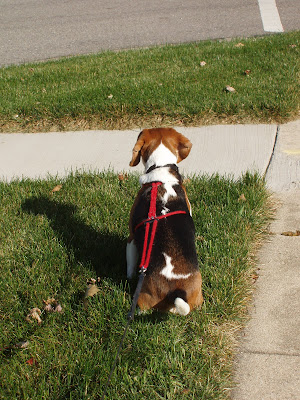 Previous post: If You Haven’t Tried This, You MUST.