And the Results Are In…Halloween 2007 Deemed a Great Success!

First, I had a GREAT morning. After meeting with Manic Mommy on Monday (which I posted about on my other blog), I was very, very motivated to write. She and I talked alot about finding/making the time to write and I told her that I had an article that I had been intending to work on for months and months, but when the book stuff got into full gear my article writing all but stopped. Okay, it did stop.

Until yesterday. I sat my butt down at the computer and wrote this 1850-word article from start to finish: Ahhhhh….awesome. What a relief to get it all out of my head and on paper! All I have to do is edit it one last time, which I will attempt to do this morning before work, and I can send it in to my editor. Whee! So thanks, Manic!

My morning writing session was interrupted only once, by the twelve-year-old. He called from school to ask me to bring him his wallet that had these school incentive coupons in it. His school has a really cool program where the teachers give out this “money” (not really money) for a job well done. They can get these coupons for anything: good grades, helping the teacher, other assorted good deeds, etc. I don’t know if they can get them taken away at school, but I have instituted a policy at home where, if he forgets something he needs for homework and has to borrow it from a neighborhood friend, he has to pay that friend 5 coupons. LOL Needless to say, he rarely forgets to bring home what he needs now!

So I let Roxie hop up into the car since it was just a school run, and as I ran to the school to drop off this wallet, her barking (from the driver’s seat) could be heard…well, probably on Mars. I found it immensely funny, however. Probably because I was almost done with my article!

After I finished the article completely, I suited Roxie up for her W-A-L-K. She was amazingly annoying on the way home, because some careless child seemed to have dropped half of his or her lunch–in crumbs–on the sidewalk near the school. Roxie was like a little anteater for a block or two, and at that point I just wanted to get home because I had two errands to run.

After my errands, I returned home and actually got some housework done: Yippeeeeeee! (How do you other people who write and work at home get your house cleaned? Suggestions, please??? I find that if I could block every other responsibility out, I could sit at this computer and write for the entire time I’m awake…)

At 4:00, the twelve-year-old decided that he DID want to trick-or-treat after all. UGH! I can’t stand procrastinators! Oh, wait. He gets it from me.

I told him that he could go trick-or-treating, but that he HAD to be in costume because I absolutely despise when kids just come to my door in regular clothing, holding out the pillowcase for candy. So, he left and came back a few minutes later wearing my husband’s 70’s afro, sunglasses, dark clothing, and one of those fake knives that collapses when you pretend to stab something. I said, “Don’t you want to wear Dad’s disco shirt with that hair?” He replied, “Uhhh…no. I won’t be needing that.” 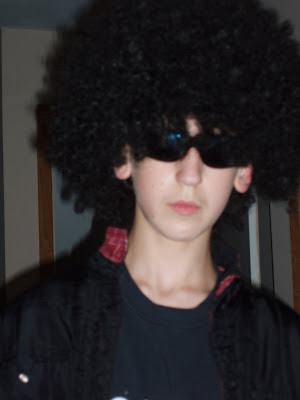 Good enough for me! And it was free, which was even better.

I had to leave to teach my spin class, because I had a total brain freeze a couple of weeks ago and forgot to attempt to get a sub. With Halloween being so low-key this year, it was no big deal, and I LOVE my class regulars. They are hilarious. One of the instructors brought in a fog machine earlier this week for a Halloween spin and one of my regulars told me she was excited to see what I was going to do. Geez! Pressure! I actually didn’t plan anything! (sort of like my anti-decorating) Feeling a little guilty, I made up a Halloween playlist, which turned out to be really fun. I tried to add some songs that other instructors wouldn’t have thought of, mixed with the Halloween standards. Here’s the list:

(Don’t Fear) the Reaper (Blue Oyster Cult)
Monster Mash (Bobby “Boris” Pickett and the Crypt-Kickers)
Devil Went Down to Georgia (Charlie Daniels Band)
Somebody’s Watching me (Rockwell)
I Want Candy (Bow Wow Wow)
Thriller (Michael Jackson)
Dead Man’s Party (Oingo Boingo)
Electrocution (E-Craft)
Burning Down the House (Talking Heads)
Devil in My Car (B-52’s)
Killer in the Home (Adam and the Ants)
Tatooine Theme (from Star Wars: I got a killer dance mix from someone–probably Julie; it was FUN!)
Who Can It Be Now? (Men at Work)

All in all we had a great class. I purchased a bunch of flashing Halloween pins that everybody wore, and it was a crazy good time!

After arriving home, I sat on the porch with Jim for a while, handing out candy to trick-or-treaters. We had some quality conversation time, which is rare for our busy lives lately, so I really enjoyed that!

We threw some dinner together and, with the fifteen-year-old, set up some tray tables so we could watch some tv. (By the way, did anyone watch “Phenomenon” on NBC? Criss Angel almost kicked some butt! It was awesome!) We talked about all the candy the twelve-year-old was going to bring home and jokingly (or not) schemed about how we were going to “help” him go through it all, all the while feeling like, “Ugh. We don’t need candy in this house!”

And then the twelve-year-old came home. I said, “Where’s your candy? We need to go through it to check the packaging.” He said, “I don’t have any candy.” Whaaaa???

Turns out, he went trick-or-treating to be with his friends and only grabbed a couple candy bars from our bowl when they stopped at our house…he was in it for the FUN, not the CANDY. That’s my son! How great is that? I’ll tell you: a great ending to a banner Halloween!