Random Thoughts From My W-A-L-K This Morning

I really enjoy walking, even more than I enjoy ironing. I made a promise to myself that when we brought Roxie home, I would walk her regularly: something I didn’t do with Bijoux.

Actually, upon bringing Roxie home, I discovered that she was going to make it so I HAD to walk her regularly, because she is so full of energy that she just needs to get it out just to–well,–behave herself! 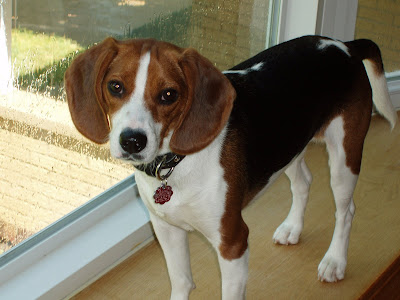 We are big fans of Cesar Millan, the Dog Whisperer. Most of the “problems” he encounters on his show are caused by not enough exercise (the dog, not the person). As a puppy, Roxie was into EVERYTHING. I couldn’t even leave her in a room by herself for more than a minute or so. Luckily, she never chewed a big hole in the couch as Bijoux did, but you name it, she tried to eat it. Once I started taking her on long walks, she calmed down–at least for a few hours!–nicely. It’s great when I want to get some work done around here…gotta wear that dog out! (She still tries to eat a whole other meal on our walks though; today I kept having to jerk her out of the path of goose poops all over the sidewalk: GROSS. Why a dog would want to eat that is beyond me.)

Which brings me back to the W-A-L-K. In this house, we have to spell it. Otherwise, upon hearing the word (or even words like chalk, caulk, or stalk), Roxie goes completely ballistic and heads for the door. If we don’t make a move for the leash, she will sit next to the offender and whine for a while.

Actually, she also goes nuts when I put on my workout clothes and sneakers, because that means that about half the time, we’re on our way out together. (The other half is just me, going to teach my group cycling class!)

This morning she was especially happy to go, because she hasn’t been on a W-A-L-K of real substance since Wednesday. So I suited her up and out we went!

I put my iPod on shuffle, and thought I’d share some thoughts that came to me during certain songs:

99 Luftballons (Nena): The German version, NOT the English version. The song came out in 1984 and I was thrilled, because I was well ensconced in my German class at school and had actually already participated in a CISV interchange with a girl (Tina) from Darmstadt in 1982 and 1983. (She stayed with my family for a month the first year, and I went there the second year) It was one of the best experiences of my life, and set the foundation for a love of almost all things German. I ended up getting through 5 years of German class (8th grade through 12th), complete with German Club, German competitions, and an eventual major in German at Tennessee Technological University. Well, I should say that I STARTED my college career majoring in German. I ended up switching to Elementary Ed because I figured I would be able to do more with it. And now I have done hardly anything with either one. But that’s another story! I hadn’t gone back to Germany since 1983, and then last summer (2006), my good friend offered me an opportunity to go with her family: Woo hoo! So, with a stop in Liverpool England on the way, we spent a few days in Dresden Germany. What I loved about it was that, as it’s in the eastern part of the country, there weren’t as many people who actively spoke English as there are in the west. It was great practice for me and the words just came back into my head, magically. I loved the opportunity to translate for my friend and to attempt to get us around without too much trouble. Now I’m hoping to go with my family in 2010, when the fifteen-year-old graduates from high school. (and hopefully he’ll get some great practice, too: I’m thrilled that he is in his second year of German class, and loving it!)

Computer Blue and Controversy (Prince): I skipped over Computer Blue twice and then when it came on again I thought, “Wow, someone thinks I should really listen to this today.” It made me think of this ridiculous story that’s on the news today about this mom who got an e-mail from Universal Music Publishing Group on behalf of Prince, telling her she had to remove her 30-second video of her adorable kids going crazy to “Let’s Go Crazy”, playing in the background. What is up with that??? It’s not like this woman was trying to gain anything, money or otherwise, by posting this video…her kids are just adorable and the video is entertaining! I’m a Prince fan, but I think this is a little drastic. I wonder if this order came from the top (Prince) or if he didn’t know anything about it at all. I can’t believe that the genius who gave away his “Musicology” CD to everyone who bought a ticket for that tour (me included! Great show!) so the sales of the CD would reflect higher up on the charts is going to deny this mom the joy of sharing her video with the public. By the way, what I think is REALLY hilarious about this video is the OTHER kid, who is whizzing her way around the house in circles. Watch it again and look for her!

Cha Cha Slide (Mr. C): God, I love this song. I love dancing to it at parties. Since I downloaded it from iTunes I love listening to it whereever, whenever. In fact, I recently started playing it in spin class. I told my class how excited I was to have downloaded it and told them I would probably play it as everyone walked out. Well, they started screaming at me to put it on right then, and I did. It’s a FABULOUS climbing song, if you can keep yourself on the bike without getting on the floor and “going to work”. While I was walking I thought, “Hmm. I think when I get home I’m going to do the Cha Cha Slide in the family room. What a great add-on to the walk that would be! And then I’m going to download the Macarena, the Electric Slide, and, quite possibly, the Chicken Dance!” (okay, maybe not the Chicken Dance.) Mr. C is from Chicago, apparently, which may explain why Oakbrook-based McDonalds Corporation used the song for a recent commercial, which I find hysterical.

Maneater (Hall and Oates): Yes, I listened to it. Hall and Oates were among my favorites back in 8th grade. I purchased their greatest hits CD a couple of years ago, yet I can’t bring myself to listen to it much. WHY? And why am I bothered by that? I love their music, yet its easy-listening quality compared to the stuff I listen to currently makes me feel downright old. Say it isn’t So! But Maneater was a good one, so today I gave it a chance on the walk. Immmediately after, I came back to the 21st Century and listened to…

The Way I Are (Timbaland, etc.): OY! I love this song. It’s also making appearances in spin class. I always think of the fifteen-year-old when it comes on, because he loves it too. His music tastes have broadened immensely over the past several years. I give Julie most of the credit for that, but I’ll take a little bit and I’ll give Jim a little bit. He used to be hooked on 80’s music, which is definitely my bag. His favorite? “She Blinded Me With Science” by Thomas Dolby. He’s in Honors Chemistry this year. A coincidence? You tell me! After a couple of years he started to branch out a bit, to the heavy metal that his father loves so much, but stuck also to the popular stuff that is played on his and my favorite radio station, 103.5 KISS-FM. Julie has exposed him to countless groups and genres that he never would have heard of if he stuck with us completely. I have always been in awe of my sister’s enjoyment of such a vast musical range, and now my kids are more like her in that way. I love it!

Whew. I could go on typing this post for another couple of hours, but I need to get some work done while the dog is still sleeping! More later!